In this series of posts, I’m looking at different aspects of the Linux Kernel, starting from less complicated areas, to understand Linux Kernel a little better. During this effort, I pay special attention to the security aspect and highlight areas that might be important for security research and testing.

The /proc mount is part of procfs, a special in-memory Virtual File System (VFS) used to present (and modify) process information, kernel processes, and other system information in a hierarchical file-like structure. This layer is expected to provide convenient access to the said information, acting as an interface to internal data structures in the kernel.

The proc filesystem is a pseudo-filesystem which provides an interface to kernel data structures. It is commonly mounted at /proc. Typically, it is mounted automatically by the system, but it can also be mounted manually using a command such as: mount -t proc proc /proc

Most of the files in the proc filesystem are read-only, but some files are writable, allowing kernel variables to be changed.

I will not go into details about the contents and structure of /proc. This is well described in the following pages:

However, following are worth mentioning since I have found these highly useful during security research/testing:

I will keep this lists updated, if I come across any additional important security usages in future.

If you are even further keen about how procfs works, you can refer to the following documents and the implementation details below:

procfs is just another Virtual Filesystem (VFS) from the Kernel’s point of view. Therefore, Kernel can treat it similar to how it treats any file system. It is not my intention to discuss how VFS works in this post. The article “Virtual filesystems in Linux: Why we need them and how they work” further discuss about how userspace accesses is provided for various types of filesystems commonly mounted on Linux systems. 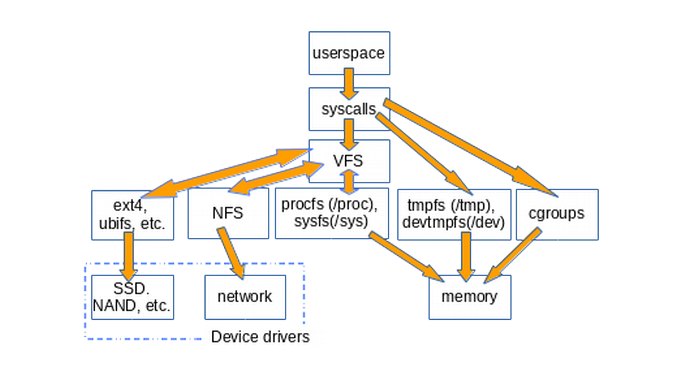 As explained in, Overview of the Linux Virtual File System in order to expose a VFS, it’s required to first register it using register_filesystem or linux/fs.h. The function proc_root_init(void) of /fs/proc/root.c does this [ref]. Also, notice the name of the root inode of /proc tree at proc_root struct of /fs/proc/root.c [ref].

Now let’s briefly look at how /proc/cpuinfo is implemented:

It’s true that this is not the complete end-to-end flow, such detailed explanation is not the focus of this post. However, if you are interested in further details, I believe now you have good amount of pointers regarding where to look at.

Following are list of interesting references that further discuss internals of procfs:

We can use strace to observe how procfs is used in different process related commands. sudo strace ps whuld result in the following trace:

Following are the highlights from the output:

Usage of VFS in procfs can be observed also by using trace-bpfcc. Install BCC as instructed in INSTALL.md and run the following command to trace any invocations made to show_cpuinfo. In a separate terminal run command cat /proc/spuinfo:

In the meantime, if you leave vfsstat-bpfcc running you will observe high VFS usage at the time of /proc reads.

Virtual filesystems in Linux: Why we need them and how they work discuss how you can utilize trace-bpfcc to observe sysfs (which we discuss next) and identify USB stick insertions.

Eventually /proc got clustered with non-process related information, especially with device & driver information. In order to make sure every device-driver adhere to a common structure and to make /proc less cluttered /sys (sysfs) was introduced from Kernel 2.6 and above.

sysfs is actually intended to simplify procfs by moving most of the hardware information out of procfs. For example, sysfs is used by udev to access device and device driver information

If you are interested, please read the response to the following unix-stackexchange answer to understand the difference and historical reasons for having these filesystems.

sysfs expose the readable and writable properties of what the kernel calls kobjects to userspace.

When you see a sysfs directory full of other directories, generally each of those directories corresponds to a kobject in the same kset. https://www.kernel.org/doc/Documentation/kobject.txt

Era before procfs (and sysfs)

Following links point to papers on “The Process File System and Process Model in UNIX System V” / “Process ad Files”, which are the initiation points of procfs:

Before procfs, debugging a process was done by going through /dev/kmem and/or /dev/mem with help of syscall ptrace. This required extensive knowledge of Kernel data structures since the person who is debugging should calculate the locations to read precisely to capture certain information. Even though tools like ps use /proc now [ref], those used to go through /dev/mem before existence of procfs (such operations also required root-access).

All such access to process or Kernel information is done through other interfaces to the Linux Kernel such as sysctl (sysctl command). An excellent post talking about attempting to port procfs to MacOS is available at http://web.archive.org/web/20200103161748/http://osxbook.com/book/bonus/ancient/procfs/.

You may also enjoy

Colombo White Hat Security is a group focused on sharing security knowledge with Sri Lankan security enthusiasts and professionals. One objective of this group is to recognize and bring together the individuals interested in security domain and providing them more visibility within the community. This CTF is a part of such effort. The other intention of the CTF is to give an opportunity to do some hands-on hacking so that all the participants can learn at least few things out of it. For the first CTF, we had exactly 150 players. There were 20 flags hidden in the system. 62 players (41%) found over 50% of the flags. 40 players (26.5%) found over 85% of the flags. 24 players (16%) found all the flags!

This assembly program is designed to create a very simple game where user is allowed to guess a hard-coded number between 1 and 255. This hard-coded number can be replaced by a randomly generated number using a random number generator for EMU8086, which is bit complex because EMU8086 do not contain an instruction to do this implicitly. Program will output if guess is higher or lower than the input number. Since the code is well commented this program can be used to understand how 8086 CPU works and how to program it.